The Naval Auxiliary Air Station in Arlington, Washington, was one of four similar stations located in Northwestern Washington developed by the Navy in 1942 to 1943 primarily for the operational training of fleet carrier squadrons. The others were Shelton, Quillayute, and Mt. Vernon (Skagit Regional). Arlington Airport began in 1934 when a 4,000 foot by 400 foot landing strip was constructed by air-minded local citizens with Works Progress Administration (WPA) funding. For the next seven years, the field was used by local and itinerant private fliers, aerial circuses, and the United States Forest Service during fire season. 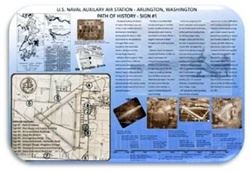 The Navy’s expanding flight training had begun to overflow Seattle’s facilities by 1940, and arrangements were made by Naval Reserve Air Base officials in August of that year to lease Arlington as an outlying practice field. However, when the Japanese invaded the Aleutians in 1942, an urgent need existed for strategically located Army airfields in the Northwest. Arlington was one of the sites chosen as a medium bomber base, and Navy consent was obtained to develop it. The Army Air Corps constructed two runways, three taxiways, a system of hard standings and many buildings.

As the war progressed the Navy’s expanded carrier program for the Pacific made it necessary to find additional training fields. So, the Navy began using Arlington jointly with the Army, but later re-assumed the airport in June 1943. By August the threat in the Aleutians began to ease and arrangements were made for the Navy to purchase all facilities built at Army expense. Activity increased through 1943 to 1944 and additional facilities were constructed to include magazine and explosive storage facilities, Class ‘C’ overhaul buildings, a boresighting range and a shotgun range.

F4F type planes were operating from the field and pilots experienced constant difficulty in both landing and taxiing with the airplane’s narrow-gauge landing gear, a major cause of several ground-loop accidents. A request was therefore made for a third runway and after obtaining permission, it was constructed between October 1944 and August 1945.

When the war ended in 1945 the need for the airport diminished rapidly. The airport was placed on caretaker status on December 1, 1945 and then on inactive status on July 1, 1946. The City of Arlington was granted use of the airport under an interim use permit on December 19, 1946 and was later deeded the property on February 25, 1959.