This building was constructed by the Austin Company of Seattle in 1943 and was part of a larger airfield development project implemented by the Navy soon after they re-assumed use of the airport from the Army Air Corps. As part of this development project, plans were drawn for the construction of eight enlisted barracks, two Bachelor Officer Quarter’s (BOQs), a dispensary, a theater-recreation building, a ship’s service, a mess hall, a central heating plant and a hangar at a cost of $917,000. The peak level of employment at the field involved some 125 construction workers. Later included in the airfield development project were a transmitter building and magazine storage facilities. 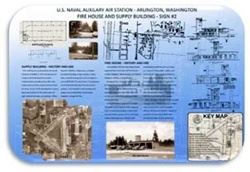 In November 1943 the Navy Department approved the construction of Fire Houses in three locations: Naval Auxiliary Air Stations Arlington, Shelton, and Quillayute. Arlington’s fire house was constructed by Vickers Construction Company in October 1944 and was slightly different than the standard in that the hose tower was built on the north side of the building instead of the south side.

Some of the first equipment included a 750-gallons-per-minute (GPM) Seagrave triple combination pumper, a 500 GPM General Motors pumper of the same type, a Bean water fog truck, a home-made combination brush fire and crash truck carrying two “Handy Billy” outfits, and small and very light pumpers similar to those used in combating forest fires. Fog trucks broke each gallon of water into millions of particles, forming a mist which cooled and smothered the fire. Foam trucks generated a blanket of suds and lather to cover pools of burning gas.

Other facilities in the fire house included:

Twelve to seventeen enlisted and civilian men manned the station at any given time.